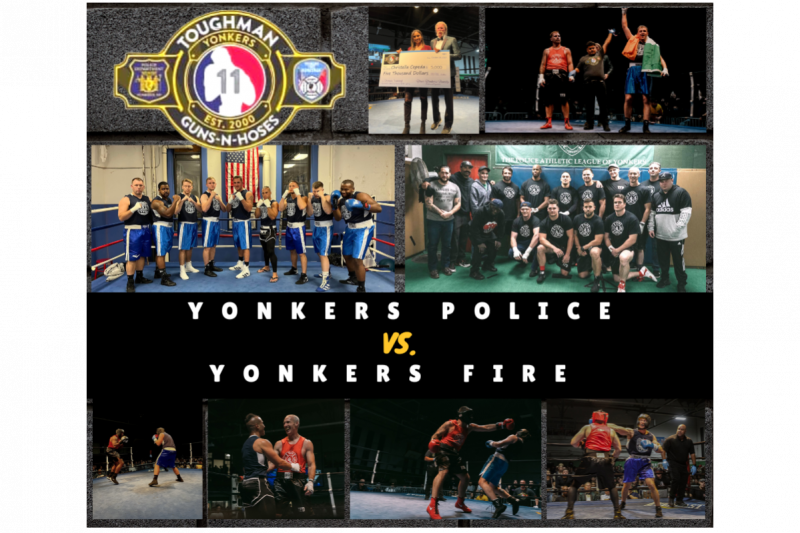 Police Officers and Firefighters Duke It Out for a Good Cause

For the 11th time, Yonkers police officers and firefighters taped up their hands, donned boxing gloves, and battled it out – all for a good cause.

The event featured nine bouts of amateur boxing between Yonkers police officers and firefighters. Each bout consists of three, one-minute rounds. Though the firefighters took the win this year by winning six of the bouts, PJ Goldfeder, president of the Yonkers Uniformed Fire Officers Association, said the real winners are the charities the event benefits.

Yonkers Police Benevolent Association President Keith Olson said the idea for the event came about more than two decades ago when he and two others were attending an NYPD boxing match.

“The NYPD team was facing off against the Irish Garda, and we were sitting around and said ‘You know what? We can do this,” Olson recalled.

Since then, the event has raised hundreds of thousands of dollars for area charities, which rotate for each toughman match. The Yonkers Police Athletic League and Elizabeth Seton Pediatric Center will each receive about $40,000 from the event.

“It’s really great to be able to help such great charities. Yonkers PAL is near and dear to our hearts. It brings cops and kids together, and in this day and age there’s nothing more important than that,” Olson said. “And Elizabeth Seton is just a one of a kind facility that we’re always trying to help out.”

The event also benefited New York State Trooper Christella Cepeda, who is a Yonkers native and a former Yonkers dispatcher. Cepeda is a Golden Gloves champion, who has been largely self-funding her training for the Olympics. She received $5,000 from the event to further her Olympic goals.

The remaining $5,000 raised through the event was split between the Yonkers Brave and Yonkers Force, two high school football teams sponsored by the unions.